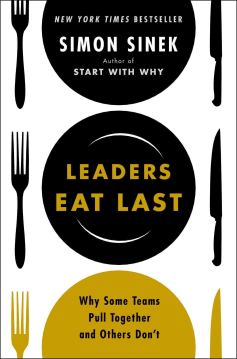 For Soldiers the concept of leaders eating last is nothing new – it’s just what we do. And if we forget, our LDRSHIP dog tag reminds us that Selfless Service is one of the seven Army values. The value of this book is in the discussion of how leaders create a circle of trust and attract people into it. Great leaders trust their people, foster internal cooperation rather than competition, and inspire with clear, specific visions and audacious goals.

It starts with the leader herself/himself. The leader  exists to serve her team, “the cost of leadership is self-interest” LTG George Flynn, USMC (not the other Flynn you are thinking of right now). Leaders take responsibility for lives, not numbers – when people become abstract, it is easier to do them harm. This point brought to mind the tendency in large commands to reduce Soldier issues/violations to numbers in an excel spreadsheet or on powerpoint that are easily briefed to the higher HQ in an effort to show the “state of the command”. A better method would be for our field grade officers and senior NCOs to spend their time working one on one with junior officers and NCOs on how to mentor and train their young Soldiers.

Which rolls into the next point – leaders practice “eyeball leadership” through personal, face-to-face engagement. There is no such thing as virtual trust – “trust is not formed through a screen, it is formed across a table.” There is a temptation (and financial incentives) to use VTCs to replace in-person meetings and conferences. Perhaps younger generations, for whom virtual communities and friendships are as real as those formed around a wooden table, will be able to form tight and trusting teams virtually, but for now personal contact is a must. Creating opportunities for team members to learn about each other – both in and outside of work – strengthens bonds of trust. At West Point, every behavioral science class always included holding a “team barbecue” to resolve issues; those professors may have been on to something with their mandatory fun.

Lastly, powerful leaders are those who transfer energy (and credit) from the top down to those doing the actual work. Leaders also provide cover for their subordinates – teammates have the freedom to fail, they can admit mistakes and information gaps, and they are open in both their agreement and disagreement. Stressful situations are great for bringing a group together and producing outstanding results, but only if the stress involves oxytocin and serotonin, the hormones created through accomplishing something with effort, but also that help us form bonds of trust and friendship (free biology lesson). People will feel safe in an organization when they don’t have to defend themselves against other members, when they feel they have control over their situation/work, when they feel like they belong. Innovation happens when team members share their failures and their triumphs openly for the benefit of the team.

Another interesting discussion in this book was some observations on how baby boomers and millennials view the world. This was of particular interest to me as a “Generation X” since many of our senior political leaders are closer to baby-boomers and the Soldiers we lead are solidly millenials. Baby-boomers view the world different from the “Greatest Generation” before: they value service to themselves as national priority (not service as a national priority), fight to protect not their way of life but how they prefer to live, and people (like the vast number of products are consume) are often viewed as disposable. Millenials have their own  unique view formed by the current environment where everything (dinner, movies, rental cars, etc) is available right now, on demand. It’s not that they believe they are entitled, it’s that they are impatient. They did not have to wait for AOL to make six beeps and the sshhhh sound for five minutes to connect to the internet. This impatience sometimes leads them to confuse real commitment with symbolic gestures because they haven’t learned that it is the struggle itself which gives a thing its value.

So with all this in mind, regardless of the level we are at, are we being the leaders that we should be?