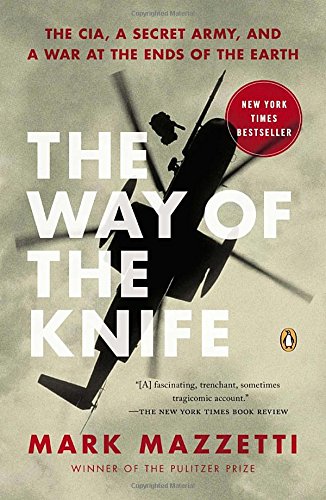 The Way of the Knife: The CIA, a Secret Army, and a War at the Ends of the Earth by Mark Mazzetti

Both authors agree on two main points: the American people should understand how the intelligence community operates and covert action is not a substitute for American foreign policy. The first point presents really tough questions. How can you help American people understand something that by necessity needs to remain a secret? If you rely on politicians to provide oversight, how do the American people ensure covert actions will not be taken for political gain? With trust in the government at historic lows, it seems very difficult to resolve these issues. On the second point, the global “war on terror” is a generational conflict. With elections every two years and the current extreme partisanship, it is difficult to form any kind of long term strategy on foreign or domestic policy.

From here the two books diverge. Crumpton’s book tells the amazing stories of a highly successful, risk taking, battle-hardened CIA; Mazetti describes an agency that has lost its focus on its primary and critical intelligence gathering mission in favor of killing and man-hunting. The CIA seems to be more adept than DoD at putting together small, entrepreneurial teams that are able to outpace a dynamic, global enemy. But this leaves long-term consequences for someone else to figure out, and absent a coherent foreign policy these small, effective teams may be doing more harm than good.

As one example of this conflicting view, Crumpton praises the CIA’s drone program for bringing together all the right people at the right time to arm a Predator so the CIA could complete the entire targeting process with the least amount of risk and maximum effectiveness. Mazetti looks at the long term consequences of a program where, in the words of Richard Blee, the former head of CIA’s Bin Laden-hunting unit “every drone strike is an execution, and if we are going to hand down death sentences, there out to be some public accountability and some public discussion about the whole thing.” Drones have even worked against the CIA’s core mission of intelligence collection by making the CIA the enemy in countries where they should be nurturing relationships to gain intelligence. Moreover, although drone strikes solve the immediate problem of removing enemy fighters from the battlefield without the pesky problem of legal imprisonment and interrogation, they likely strengthen terrorist group narratives that the United States is waging a war against innocent Muslims. CIA control of the drone program also raises the question of how an agency responsible for a targeted-killing campaign can also produce dispassionate assessments on the effectiveness of that campaign.

The insatiable need for more intelligence in the current global conflict has given rise to a “military-intelligence complex.” Mazetti argues that while the CIA has essentially become a military command running a clandestine global war, it has abdicated their intelligence gathering role to unreliable foreign intelligence services, paid privateers, and proxy armies. Although some may view the CIA’s cooperation with special operations as a positive partnership  – essentially linking intelligence with military operations to produce quick wins – it can also be viewed as a way for the CIA to broaden their Title 50 authorities. Mazetti also argues that one reason the Arab spring caught us off guard was because not enough spies were doing actual spying and not enough case officers were in the streets gathering intelligence. Instead, the agency had tied itself to authoritarian regimes in the Arab world and their intelligence agencies who did not paint an accurate picture of the simmering conflicts within their societies.

To end this discussion, Crumpton brings up a quote from Clausewitz that “courage of responsibility is over all other forms of courage.” This immediately reminded me of GEN Votel’s response to questions about the January mission in Yemen during the posture hearings to Congress this past week. He took full responsibility for all consequences of that mission – the loss of life and equipment as well as the intelligence gains that resulted. It will never be possible to release the full details of intelligence gained from that mission to the American people, but we must rely on their trust that it was worth the cost. We must also continue to rely on our leaders, both military and civilian, to have the courage to take responsibility for our human interventions.