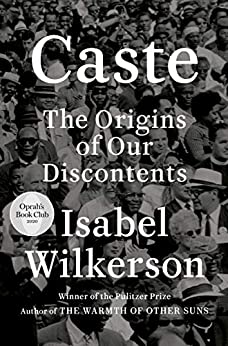 “If people were given the choice between democracy and whiteness, how many would choose whiteness?” Some of the rioters who violated the Capitol on January 6th with the aim of stalling or overturning an election carried confederate flags. Some were members of white nationalist groups. Some were active duty military troops. This question, posed by the author of Caste, should shock us out of our complacency as servicemembers and Americans, because the answer indicates whether our country as we know it can survive.

Caste: The Origins of Our Discontents describes a hierarchy within America that at least half its citizens would balk at – a system in which the color of one’s skin firmly determines one’s place in society, despite the laws written to prevent this very inequity. Ms. Wilkerson, a Pulitzer prize-winning journalist, provides detailed historical examples and exhaustive research to bolster her uncomfortable, but crucial argument. She defines caste as a system of arbitrary boundaries that separates and ranks particular groups. The distinction of being “white” arose in America and only gained meaning when compared to something not white.

The hierarchy is underpinned by power – which groups possess it and which do not – and determines who receives resources, rights, and respect. Several pillars frame the caste system: religious justification, endogamy, fear of pollution by lower castes, dehumanization of the lowest caste, and the use of torture and cruelty. Wilkerson makes several unflattering comparisons to the American system. The American caste system was so effective, the Nazis studied it in the 1930s to determine how to institutionalize racism in the Third Reich. Ironically, the “one drop” rule, part of some states’ laws which declared a person’s race as black if they had even one drop of African blood in their family tree, was too harsh for the Nazis.

Wilkerson describes, in vivid awful detail, slavery in the United States and the crimes that followed reconstruction. Slavery created a self-sustaining bottom caste for the United States that was impossible for black people to escape. Because black people were not permitted to learn, they were considered uneducated; because they were seen as immoral, rape by their masters was justified; when they tried to defend themselves from beatings and torture their resistance was considered criminal.

She details the lynchings that occurred across the United States, though primarily in the south. White men beat, flayed, burned, and hung black men they suspected of committing crimes such as disrespecting a white woman. Lynching postcards, which commemorated the murders, were so popular they became a sub-department of the postcard industry. Even service to the nation could not protect a black body. In 1946, Sergeant Isaac Woodward, Jr., a black veteran in uniform on his way home from the Pacific theater, was beaten and permanently blinded by a local police chief for the crime of demanding a white bus driver allow him off the bus to relieve himself.

The caste system inflicts harm at every level. People are conditioned to believe that being counted among those at the bottom would be horrible, so they must struggle to rise above. Caste drives people to maintain the hierarchy so they can keep their own individual ranking, privilege, and advantages; thus, it is self-perpetuating. It creates an unjust system because those at the bottom take the fall for lesser crimes, while those at the top remain free.

There are only a few ways to break the system. One is for people of the lowest caste to appear in unexpected places or positions; Wilkerson calls them “shock troops.” Vice President Harris and Secretary Austin come to mind. Rather than honoring confederate symbols of the Civil War, which was fought to maintain slavery, she highlights the German example after WWII. The Germans removed all commemoration of the Nazi party and its leaders from public spaces and instead honors the victims. She highlights the stumbling stones in Berlin. These stones are placed at a level just above the ground outside the homes of those killed in the Holocaust; to read the inscription on each stone one must lean over and bow in respect.

To break the caste system, people must embrace a sense of joint responsibility and see their fellow citizens as themselves. It will take radical empathy – understanding and learning about another’s experience from their perspective and feeling their pain as they perceive it. We would see that “when others suffer, the collective human body is set back from the progression of our species.” It is in every human’s interest to break this system, and it is in every human’s ability to try.